Types of Solvent Evaporators – An Overview 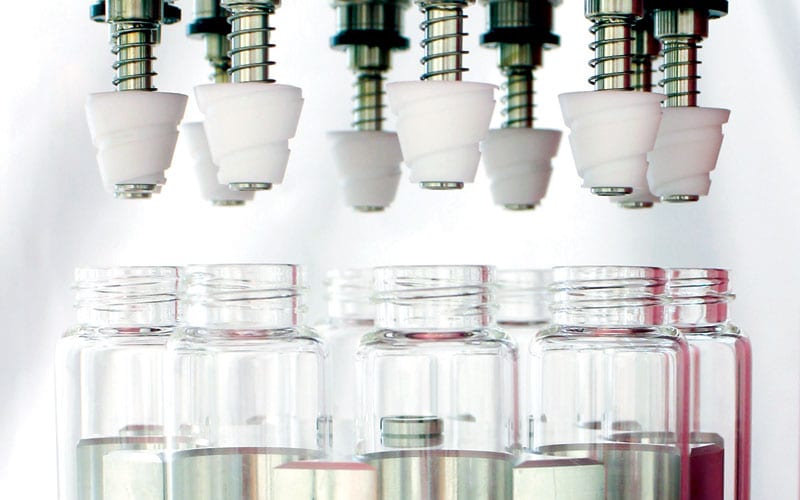 Removal of solvents is a common need in any organic chemistry lab and often times the major “bottleneck” in a synthetic workup, thereby slowing down production. Additionally, evaporation of solvent is required for recovery of samples analyzed by NMR spectroscopy. To accomplish this task, different types of evaporators have been developed. Herein, we provide an overview of solvent evaporators commercially available on the market. 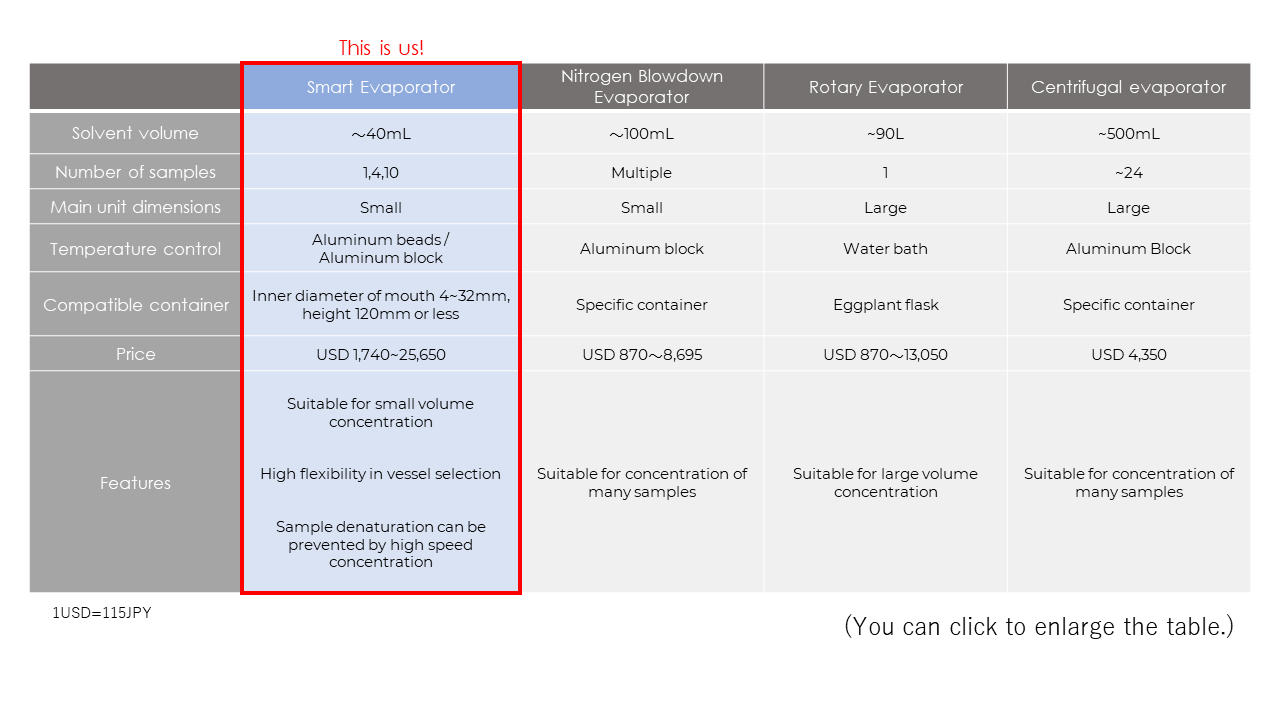 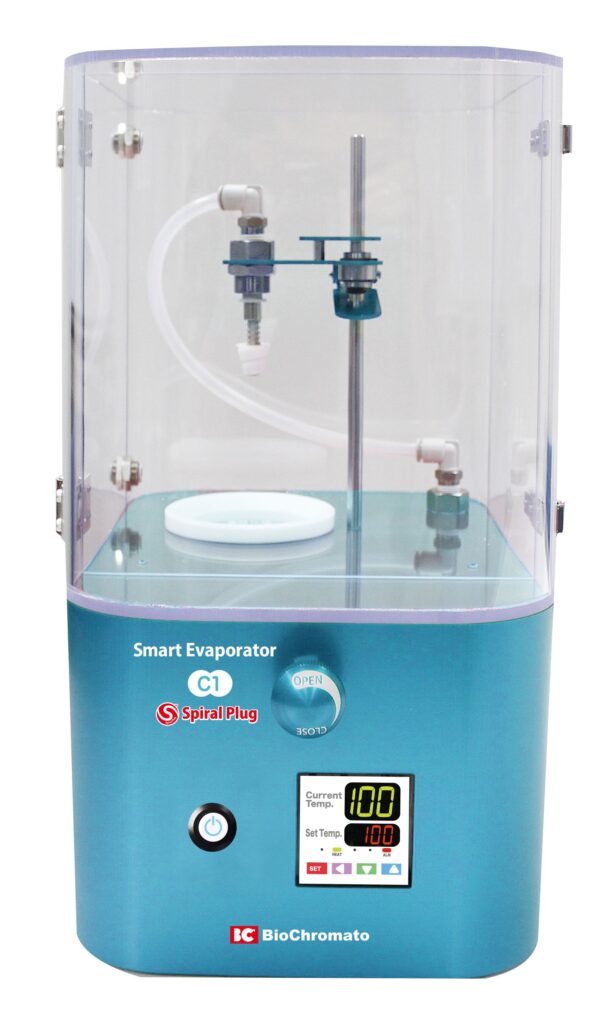 A novel evaporation system offers a new means for evaporating samples in vials using a spiral air flow evaporation method. This method has been developed by BioChromato in an instrument commercially available called the Smart Evaporator. Unique Spiral Plugs are placed over the vial where it is connected to a vacuum pump. However, instead of pulling a high vacuum, as the vacuum pump aspirates the vapor above the solvent surface, the helical grooves of the Spiral Plugs draw in an influx of air or inert gas. The Spiral Plugs control the airflow over the surface of the solvent in a spiral. This both lowers the vapor pressure and increases the surface area. Meanwhile, sample vials are placed in an aluminum bead bath connected to a programmable heater up to 100°C where heat is transferred to speed up the evaporation process. There are many benefits using the Smart Evaporator. Since it is flow-based, there is no risk of bumping or splashing. Additionally, since concentration is carried out just below atmospheric pressure, there is no risk of implosion. Thus, any vial, flask, or tube that fit in the instrument are compatible, allowing direct concentration in a sample vial already being used. This can help avoid cross-contamination and result in higher yields. This is a useful method in evaporating higher boiling point solvents like DMSO, DMF, or water. A Smart Evaporator is an excellent way to evaporate high boiling point solvents directly in a sample vial. With the multiple channel models, it’s possible to evaporate up to 10 at a time. 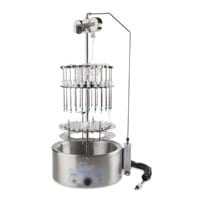 Nitrogen evaporators use a stream of nitrogen gas to continuously blow on the surface of a solvent (AKA “Nitrogen Blowdown”). This lowers the vapor pressure and increases the surface area. To accomplish this, some chemists simply connect a nitrogen gas line to a syringe to dry down a single vial. However, this is easier said than done. If the flow of nitrogen is too far away from the sample surface, the evaporation speed may be too slow. If it is placed too close, there is a risk of samples blowing over. Indeed, care must be taken for optimal results. In order to better optimize and automate the process, companies have developed nitrogen evaporators. Typically, the nitrogen gas is heated and/or a heat block is used to speed up evaporation. Since a nitrogen blowdown system can be connected to an array, nitrogen blowdown is useful when working with high number of smaller sample sizes (ex. 96 well plates). However, nitrogen blowdown is not recommended for large sample sizes, especially working with volatile or semi-volatile samples due to both time and turbulence. 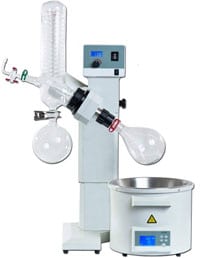 A rotary evaporator (rotovap) works by placing the sample under vacuum thereby lowering the boiling point of the solvent. Typically, a round bottom flask is used where it is lowered in a heated water bath. The flask is rotated to increase the surface area and provide an even transfer of heat. A rotovap is found in almost any organic chemistry lab and is a great way to quickly evaporate most volatile organic solvents. Thus, it is typically used when evaporating single volatile samples at relatively larger sample volumes. However, since the glassware is under high vacuum, there’s always a risk of the solvent superheating and boiling over or “bumping.” Once a sample boils over, there is a high risk of cross-contamination and losing material. There’s also a safety concern regarding the glassware as improper selection or defective glass could lead to an implosion. Additionally, since it can only handle a single vessel, evaporating multiple samples must be done in series, which can be time consuming. 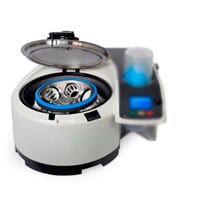 A centrifugal evaporator also works under high vacuum to lower the boiling point. However, instead of rotating the glassware, samples are placed in a multiplexed heated compartment where they are centrifuged to avoid bumping. A centrifugal evaporator is a great way to evaporate a large number of samples at once since they can accommodate multiple centrifuge tubes at a time. However, it may not be suitable for higher boiling point solvents like DMSO or water, as it can be time-consuming, typically overnight. This is particularly frustrating If you only have a few samples to evaporate, and tying up your evaporator for many hours creates a backlog of your other samples you wish to dry down. Additionally, care must be taken by the operator to ensure that the samples are well balanced and proper centrifuge tubes are used as improper glassware tends to break under centrifugal force. This can be quite problematic when working with precious samples or hazardous material.