In order to monitor the changing volatile compounds profile as coffee beans roasting, the Volatimeship combined with a DART-MS was used. As a result, caffeine was detected in the beginning of roasting, and on the other hand, pyridine was detected in the latter of roasting. Thus, this system enables detection of the changing profile of volatile compounds.
This application was provided by Prof. Rabi Musah (University at Albany—SUNY).

Mass spectra were acquired by using a JEOL AccuTOFTM-DART® 4G high resolution mass spectrometer (HRMS) equipped with a BioChromato, Inc. Volatimeship.
A green unroasted coffee bean was placed in a 20 mL scintillation vial. The vial was sealed with the silicon cap provided with the Volatimeship(Figure 1). The vial was then placed on a hot plate and heated to monitor the headspace emissions during the roasting of the bean. 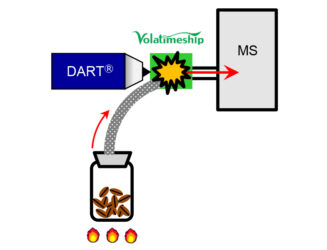 A representative DART-HRMS spectrum collected during the roasting process is shown in Figure 2.
The reconstructed ion chromatograms of protonated masses consistent with those of caffeine (m/z 195) and pyridine (m/z 80) are shown in Figure 3. As is illustrated, each monitored mass showed a sharp increase followed by a rapid decrease in signal over the course of the analysis.

Figure 2. A mass spectrum collected during analysis of the headspace of a roasting coffee bean. The base peak at nominal m/z 195 is consistent with the protonated mass of caffeine. 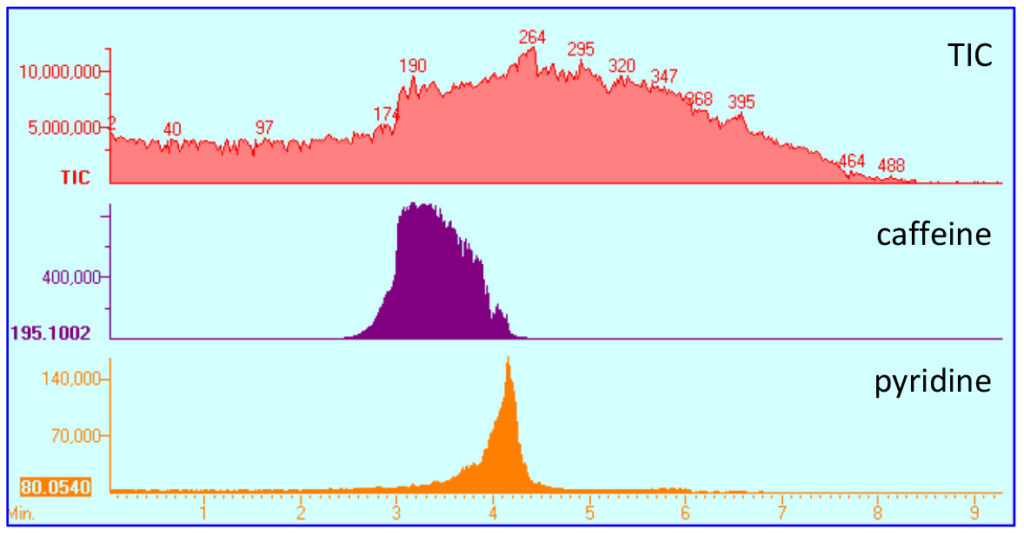