Typical analysis of the condensation polymers containing ester linkages such as PET and PBT by pyrolysis GC/MS is performed by adding the methylating agent TMAH (Tetramethyl Ammonium Hydroxide), in order to suppress thermal decomposition of unknown. This pretreatment is not necessary with the ionRocket.

The analyzing tool was the ionRocket heating system connected to the DART®-MS (Direct Analysis in Real Time – Mass Spectrometry). Small quantities of the samples were put on the POT and analyzed. The temperature was increased at a rate of 100ºC per minute, from 30ºC to 600ºC.

TIC is shown in Fig 1. MS spectra measured at 400ºC is shown in Fig 2.
In Fig 2, the monomers and dimers were mainly observed.
The comparisons of ionRocket-DART®-MS spectrum made it possible to distinguish between PET and PBT. 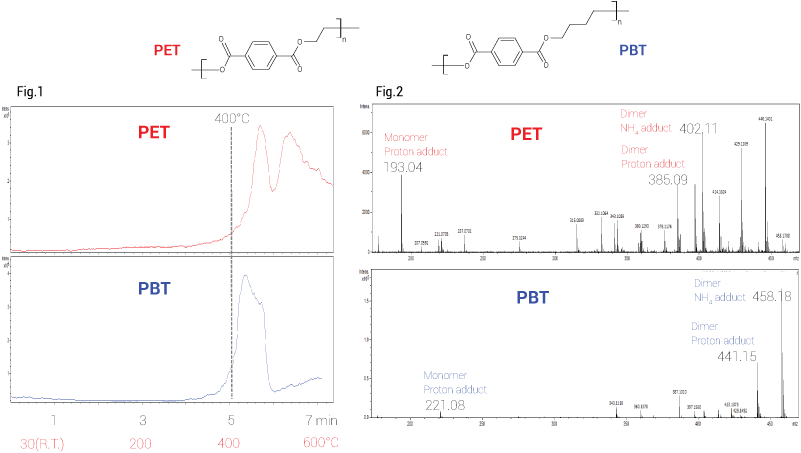 Fig.1 TIC of PET and PBT
Fig. 2 MS spectrum measured at 400°C. The preset temperature of DART®-SVP was 400°C. Ionization was DART® positive.