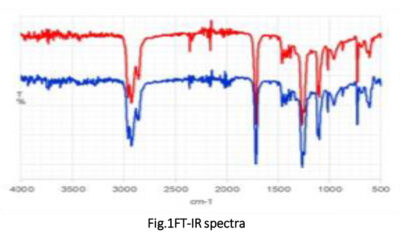 PVC (polyvinyl chloride) is widely used, due to its excellent strength, weather resistance, and processability. These properties are highly dependent on the plasticizers, stabilizers, and other additives incorporated during production, which should act as markers for discriminating between PVC samples from different sources and products. FT-IR is frequently used as a rapid qualitative analysis for determining foreign matter/foreign objects in samples. However, FT-IR may not offer enough information when the foreign matter is PVC, since it does not differentiate between different versions of PVC (Fig. 1). In this application, PVC tubing from two different manufacturers was analyzed using ionRocket DART®-MS. The results clearly show the different additives each manufacturer used in their products, demonstrating that using additives as markers is useful for a rapid differentiation between products made from the same base polymer.

PVC tubing from two different manufacturers (Product A and Product B). 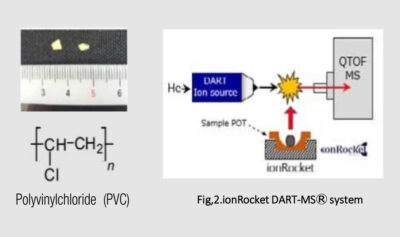 A DART®ion source equipped with ionRocket was used to thermally desorb, ionize, and introduce samples into a QTOF-MS system. (Fig.2) The sample (ca. 0.5mm²) was placed in an ionRocket sample POT. A temperature gradient of 100°C/min.
from room temperature to 600°C was applied (total run time:7 min).

In the FT-IR spectra shown in Fig. 1, the material could not be identified as PVC due to the influence of plasticizers in the sample. There were also no meaningful differences found between the FT-IR spectra for Product A and Product B.
In the TIC shown in Fig. 3, no significant differences were observed between the samples.
Fig. 4 shows the mass spectra generated when the sample was heated to 200-300°C. Multiple species were easily identified as plasticizers and other additives using an industrial additive database and search program (Compound Search, available from BioChromato). Each product was found to contain a plasticizer not present in the other product. Fig. 5 shows the mass spectra generated at 300-400°C. Pyrolysis products of PVC were detected in both samples. However, no significant difference was observed between the samples.
In summary, it is possible to discern between two samples made from the same base polymer by identifying differences in the additives incorporated into each via ionRocket DART®-MS. Moreover, ionRocket DART®-MS allows this identification to be made between samples which are indistinguishable by FT-IR.
It was confirmed that ionRocket combined with DART®-MS enables the detection of additives and base-resins contained in paints without any pretreatment or sample preparation. Therefore, this analytical method is useful for R&D and QC for paints.