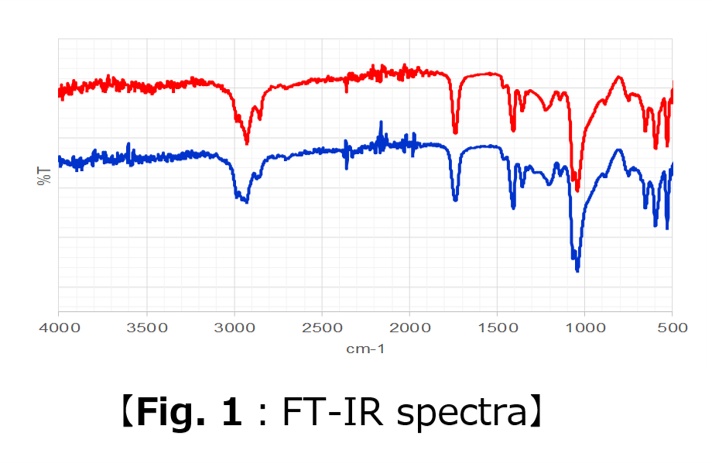 Food wrap film, also known as cling film or plastic wrap, is widely used for food processing and packaging, leading to the risk that plastic wrap might be introduced as a foreign object/ foreign matter within the food item itself. While some vendors have switched to making food wrap from Low Density Polyethylene (LDPE) for environmental reasons, many still make food wrap from PVDC (polyvinylidene chloride). Since multiple vendors might use food wrap at different stages during manufacturing of food items, the ability to discriminate between food wraps made by different manufacturers could help identify the source of contamination. FT-IR is a frequent choice for rapid analysis for foreign matter, but in this case FT-IR cannot discriminate between PVDC films made by different manufacturers (Fig. 1), thus FT-IR would not be suitable in this case.
In this application, ionRocket equipped with Direct Analysis in Real Time Mass Spectrometry (DART®-MS) was capable of discriminating between PVDC films made by different manufacturers. This method is suggested to be a rapid and effective tool in the investigation of foreign objects in food processing and packaging. 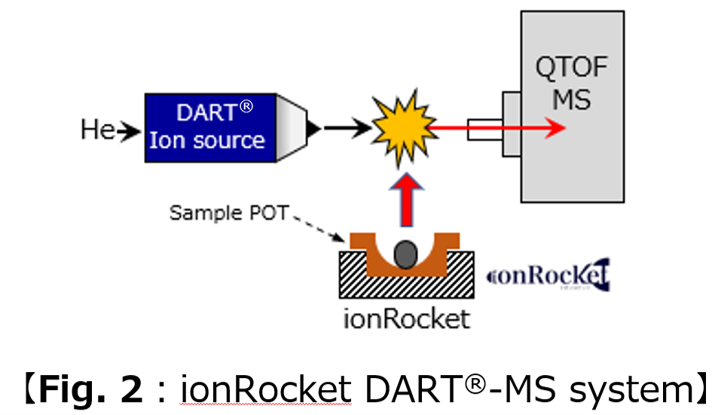 The ionRocket combined with a DART® equipped with Quadrupole Time of-Flight Mass Spectrometry (QTOFMS) was used as the analytical system for this application (Fig. 2). A small piece of sample (approximately. 0.5 mm²) was put into the ionRocket sample POT. A temperature gradient of 100°C/min. from room temperature to 600°C was applied (total run time: 7 min) directly to the samples.

In the FT-IR spectrum shown in Fig. 1, the materials could not be identified as “PVDC” due to the influence of plasticizers. Also, FTIR showed no difference between the two samples. In the TIC shown in Fig. 3, no significant differences were observed between the samples. Fig. 4 shows the mass spectra acquired at 200-300°C. The samples can be distinguished by using additives as a marker, as different additives were detected in each sample. Additives were easily identified by using the industrial additive database “Compound Search” (BioChromato). Fig. 5 shows the mass spectra acquired at 300-400°C. Pyrolysis products of PVDC are detected in both samples, however, the detection intensities of pyrolysis products around m/z 450 are different, indicating that while both samples are PVDC, they do not share the same composition.

It is possible to identify and discriminate between PVDC films by using additives as markers via ionRocket DART®-MS. Therefore, this analytical method is useful for not only the detailed examination of foreign object contamination pathways but also for QC and forensic discrimination.
Moreover, ionRocket DART®-MS enabled rapid identification between the same material’s products which can not be identified by FT-IR.