Since paints often require material protection and stain resistance, it is often necessary to add organic and inorganic compounds such as resin, pigment, and various other additives. However, qualitative analysis to determine the material composition of these paint formulations requires much time and effort due to laborious pretreatments and sample preparation such as separation and extraction.
In this application, the material composition of paint samples were directly analyzed after drying using ionRocket combined with DART®-MS.

Water-based paints (Brand A, Brand B) 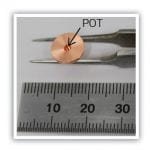 Paint samples were allowed to cure overnight at room temperature (0.5 mm x 0.5 mm) and were then placed into the ionRocket sample pot. A temperature gradient was applied by heating each sample from room temperature to 600 ℃ at a rate of 100 ℃/min (total run time: 7 min.).

As a results of FT-IR, no significant difference was detected between these acrylic resins (Figure 1).

For a detailed comparison, heat maps of these samples were recorded as shown in Figure 3. It was clear that the types and the intensity of detected ions differed considerably in the low temperature and low molecular weight region.

It was confirmed that ionRocket combined with DART®-MS enables the detection of additives and base-resins contained in paints without any pretreatment or sample preparation. Therefore, this analytical method is useful for R&D and QC for paints. 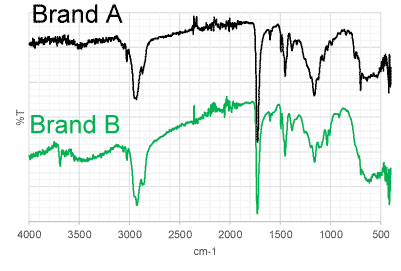